I never managed to get around to a timely update of the fun I had Webstock. It was, as I’d hoped, a most excellent, inspiring, re-energising and fun conference – just like the first. The crew behind Webstock managed something that isn’t as common as we hope it to be in NZ.. which was to prove it wasn’t a fluke and pull it off for a second time. Well done guys, it’s no easy feat.

My highlights from the conference:

My feedback for the conference is fairly similar to some other bits I’ve seen around the place. A ponder at why LukeW and Michael Lopp or Amy Hoy and Dan Cederholm were streamed while Molly Holzschlag wasn’t. No need to mention the Wifi either

Only two more years till the next one, or is it?

Thanks to the ubiquity of things like iPhones and iPod Touchies all trying to connect to the WiFi as well as the usual laptops has meant no internet access for me since my first post this morning. I have been taking notes so the speeches from the afternoon will make it on here… eventually. Some of them were awesome!

Here’s a rather enterprising way a person let others now how he/she felt about the WiFi, cute: 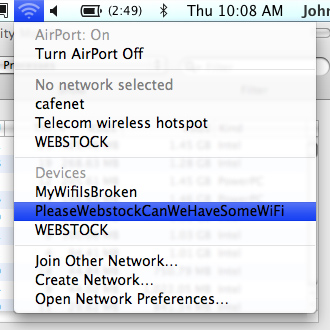 Whoops. Got here way too late this morning and missed the welcome speech plus the first 20 mins of Nat Torkington’s speech. The goodie bag looks great and things around the conference hall look similar to 2006.

Nat Torkington
Nat presented well and only had minor hickups with his presentation with font issues that meant lot of text didn’t make it onto the slides. But he did really well dealing with it and probably had better audience attention because of it.

Nat talked about designing for the future using analogies from Victorian-era England. Strong messages were on measuring, gathering, and analysing data, then acting on it. The key trends he talked about were:

Growth
Growth in computing power just gets soaked up. We will use any addition power we create.

Media
Newspapers are dead and TV is starting to realise they have no control over their content. Journalism on the web (not citizen journalism) and what we’re seeing (more on the data message).

Immediacy
Users expect immediacy. Design for mobile devices! Ubiquity BUT they can be walled gardens.

People
They may be lazy and irrational but learn how they will act and react. Read Mind Hacks by Tim Stafford. Important notes: people focus on short-term gain, fairness, and the thrill of overcoming a challenge for the first time (hedonic adaption). We also overestimate our confidence.

Reality-based
Gather info. Admit you were right/wrong. Act based on the data.

Thoroughly enjoyable speech and a great session to start the conference.

Molly Holzschlag
Molly talked on why web standards aren’t. It was a good presentation on web standards but may have been a bit too focused for the whole audience. Slide design wasn’t necessarily poor but could be improved. Some really good questions were asked such as “have we failed on the ideology or has the ideology failed us?” “Is it standards vs. best practice or standards vs. interoperability?”. Molly has been working with web standards for 10 years!

Shawn Henry
Shawn spoke on making your website shine with accessibility. This was a tough ask with me because I don’t think anyone could beat Darren Fittler’s presso in 06. She used some great examples of people using mouth-sticks to type, or just their thumb. How is their experience compared to you assumptions on how people should use your site? The screen reader demo was good but it doesn’t top watching a blind Darren Fittler use it. Shawn finished with a good call to action – fight the good fight with accessibility.

Hands up who’s heading to Webstock this year? Cool! I’ll see you there.

I’ve been looking forward to Webstock for a long time now and I still question their decision to hold it every two years. But the wait is over and tomorrow the conference proper starts and then wraps up on Friday evening. Sibylle has already attended one of the workshops and she got to show off her goodie bag at work yesterday. They look insanely cool!

I think I’m most looking forward to Kathy Sierra, she was f…ing brilliant last time and I guess I’m not expecting anything less. She is breaking her “silence” at Webstock too. I feel quite honored she chose Webstock to do so.

Last time I tried my best at live-blogging the event and got quite a good response for it. I’ll see how it goes but there is a good chance you’ll see a dozen posts on this neglected blog for the next couple of days.

P.S. I’m still perplexed by that slogan. Are we really coding for freedom?

You are currently browsing the archives for the Webstock08 category.