There is something wrong with this

On February 18th, 10,000+ people will run, walk, and roll along Wellington’s harbour as part of the annual Round the Bays run. Last year was my first time and I had an absolute blast. If you haven’t done it before and are contemplating it… JUST DO IT! As a bonus geekiness, this year everyone gets issued with transponders so you’ll get an accurate time for the race too!

On the most part I’ve been fairly impressed with the marketing effort. This morning I received an email from the organisers mentioning the run [good] and the need to get registered soon [very good] and even let me know that there were multiple ways to register [very good]. However there is one major thing wrong with their email. Can you spot it? Here is the text from the email verbatim:

The Vector Wellington Round the Bays is now only 11 days away!

We’ve been receiving an enormous number of registrations which means we have had to make a few changes to the registration process.

Registration Number Cap of 12,000 Entries
With registrations coming in thick and fast we are on track to break the magical 10,000 registrations number. However, this has highlighted a possible logistical problem and we need to put a cap of 12,000 entries for this year’s event. To ensure you secure an entry into the event, register online this week as entries may close at 12,000 next week. Don’t forget to pass on the message to your friends and family so they don’t miss out.

Extension of Online Registrations
The online registration dates have been extended to ensure you can secure a place.

What do you think?

This is where fire goes 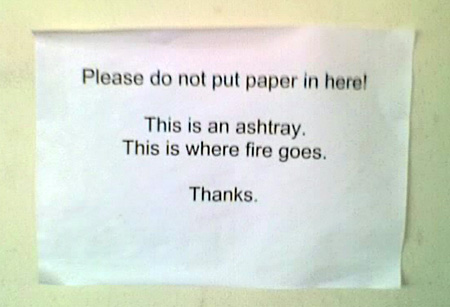 Spotted in a building carpark off The Terrace…

It was interesting start to the day for most people on The Terrace today. Power went off at 8:30am and didn’t come back on until 10:30am meaning today was less than productive. It’s a little odd how quiet (and dark) the office was without power.

However, it appears the outtage affected people’s grammar as well… 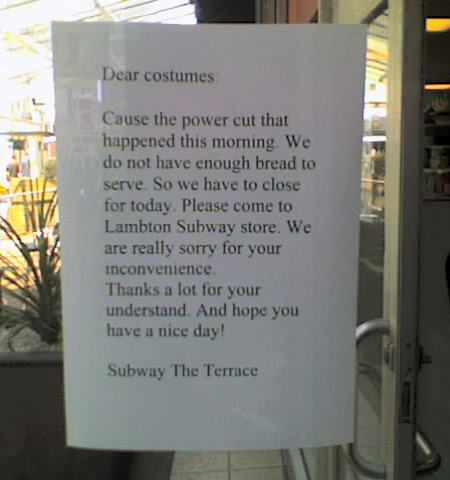 Funnily enough, the notice on the other door was upside down…

Tom over at WellUrban has been posting some interest articles on statistics from the recently released 2006 Census. As you would expect, his focus has been on Wellington and his last post was on the age structure of our city and the 4 other cities that make up the Wellington region.

Wellington itself seems to be exactly opposite the other regional cities as well as the NZ average in terms of age structure. Put bluntly, we have few very young or very old persons, and a great proportion of 20 to 40 year olds. As usual the easiest way to see and understand this is to visualise in the form of graph as Tom has done – the lime green is Wellington City (click through and read the full article):

In a stunningly reassuring vote, Parliament has voted 72-49 against raising the legal drinking age.

I’ve been fearing and stewing on this private members’ bill for the last couple of weeks and I’m very very pleased to see reason and logic prevail.

More on the reasons why I believe this is the better outcome as well as the letter I meant to send to my MP after the jump (unfortunately it’ll probably be the weekend before I get a chance to put it up).

Please feel free to leave your own comments on this bill in the meantime. 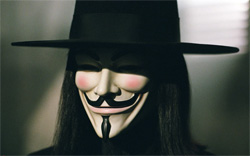 …the 5th of November… Two new sets added to my flickr account. On Friday night I went on a bit of a photo shooting rampage with Trey. The idea being to take some shots of Wellington at night. Have a look at Trey’s (much better) shots here. And then on Saturday, Mrs S got her ear pierced which was fun (for me) to take photos of… apparently it wasn’t “that painful”. The studio was Flesh Wound in upper Cuba St, the piercer was this chap.

I’ve noticed on a few right-wing blogs over the last couple of days (yes, I’m looking at you Mr. Farrar) increasingly mentioning a politician/bureaucrat referred to as “H2″. They are referring, of course, to Helen Clark’s chief of staff, Heather Simpson. Apparently here in Wellington with Helen as H1, Heather is known as H2.

Her name has appeared in the media most recently over her letter to Parliamentary Services on the controversial pledge cards that kick-started the current nastiness in NZ politics. I didn’t think much of that letter in the media other than a member of Helen’s staff was probably just doing what was dictated to her by H1 herself.

Thanks to a fairly detailed background at Liberty Scott, I feel I now know a little more on the significance of H2 and that letter.

I don’t have enough knowledge to know how accurate this article is and I’m sure if you looked hard enough there is probably a rebuke or two in the blogosphere but it does make for interesting reading as a citizen of this country. The media, however, has confirmed she is one of the top 4 most influential Labour party members.

As for the pledge card issue itself, I don’t really feel that debating it here would shed any new light on the subject. Labour should pay it back but politically they can’t, especially after National’s repeated claims of corruption. As Audrey Young points out:

“National’s fight against Labour’s election spending is not about the 2005 campaign, it’s about the 2008 campaign and who wins”.

Did ya get the memo?

Seth Godin points out something I fear we are all too eager to forget. An example:

88% of all users have never heard of RSS.
1% of internet users use Digg on an average day.
20% of the world speaks English.

This is especially relevant to all of you who are (like me) young Wellington IT professionals. We live in a very insulated environment and can sometimes forget how much of this isn’t “normal”. Let me add a few more of my own specific for Wellington:

As Seth points out, the point of this list isn’t to persuade you to give up your new media quest and become another Auckland drone driving your oversized SUV to work. “No, all the growth and the opportunity and the fun is at the leading edge, at the place where change happens.” It’s just worth remembering where you are on the bell curve in contrast to where a lot of other people are. Keep in touch with this side, you have as much to learn from them as they do from you.

There’s something mildly hilarious about this

Fashion label Insidious Fix have been busted – running what appears to be a rather sophisticated $1milllion cannibis growing operation at their Onehunga premisis.

I wonder if this will have an impact inasmuch at it will close the company. Better get to the old Krazy Lounge on Cuba St that they’ve been using as a temporary sales store before they close up. Although it has been reported that the Fidel’s empire will be invading this space shortly.

JAFW doesn’t have the same ring to it…

Generation XY is holding a competition to see who can come up with a suitable acronym similiar to JAFA, but for Wellingtonians. I agree there are some really common traits with Wellingtonians… such as being able to recognise 24 shades of black suit… but good luck trying to find/name a term. I liked the comment he made about walking along Lambton Quay:

If you have any suggestions, head on over and leave them – there is a ‘Way of the Jafa’ book up for grabs.

Next Wednesday (5th of July) there is another event on organised by UP and it looks to be a really good one. I won’t be here (bugger!) but I would strongly urge you to go if you are into “Gadgets, Games and Geeks“. Registration is from 4:30pm with a 5:30 start and it’s going to be in Renoulf Foyer at the Wellington Convention Centre. And the best bit is that it is free.

If I was going I’d be interested in checking out Renaissance’s Apple stand as well catching Mauricio Freitas’ presentation. They’re also giving away an iPod Nano at some stage during the evening. If you’re not already registered with UP, just go to the site and sign up (again, it is free).

You are currently browsing the archives for the Wellington category.