Whoops. Got here way too late this morning and missed the welcome speech plus the first 20 mins of Nat Torkington’s speech. The goodie bag looks great and things around the conference hall look similar to 2006.

Nat Torkington
Nat presented well and only had minor hickups with his presentation with font issues that meant lot of text didn’t make it onto the slides. But he did really well dealing with it and probably had better audience attention because of it.

Nat talked about designing for the future using analogies from Victorian-era England. Strong messages were on measuring, gathering, and analysing data, then acting on it. The key trends he talked about were:

Growth
Growth in computing power just gets soaked up. We will use any addition power we create.

Media
Newspapers are dead and TV is starting to realise they have no control over their content. Journalism on the web (not citizen journalism) and what we’re seeing (more on the data message).

Immediacy
Users expect immediacy. Design for mobile devices! Ubiquity BUT they can be walled gardens.

People
They may be lazy and irrational but learn how they will act and react. Read Mind Hacks by Tim Stafford. Important notes: people focus on short-term gain, fairness, and the thrill of overcoming a challenge for the first time (hedonic adaption). We also overestimate our confidence.

Reality-based
Gather info. Admit you were right/wrong. Act based on the data.

Thoroughly enjoyable speech and a great session to start the conference.

Molly Holzschlag
Molly talked on why web standards aren’t. It was a good presentation on web standards but may have been a bit too focused for the whole audience. Slide design wasn’t necessarily poor but could be improved. Some really good questions were asked such as “have we failed on the ideology or has the ideology failed us?” “Is it standards vs. best practice or standards vs. interoperability?”. Molly has been working with web standards for 10 years!

Shawn Henry
Shawn spoke on making your website shine with accessibility. This was a tough ask with me because I don’t think anyone could beat Darren Fittler’s presso in 06. She used some great examples of people using mouth-sticks to type, or just their thumb. How is their experience compared to you assumptions on how people should use your site? The screen reader demo was good but it doesn’t top watching a blind Darren Fittler use it. Shawn finished with a good call to action – fight the good fight with accessibility.

Hands up who’s heading to Webstock this year? Cool! I’ll see you there.

I’ve been looking forward to Webstock for a long time now and I still question their decision to hold it every two years. But the wait is over and tomorrow the conference proper starts and then wraps up on Friday evening. Sibylle has already attended one of the workshops and she got to show off her goodie bag at work yesterday. They look insanely cool!

I think I’m most looking forward to Kathy Sierra, she was f…ing brilliant last time and I guess I’m not expecting anything less. She is breaking her “silence” at Webstock too. I feel quite honored she chose Webstock to do so.

Last time I tried my best at live-blogging the event and got quite a good response for it. I’ll see how it goes but there is a good chance you’ll see a dozen posts on this neglected blog for the next couple of days.

P.S. I’m still perplexed by that slogan. Are we really coding for freedom?

The TUANZ Business Internet Awards are on tonight and I have the pleasure (?) of seeing two sites I’ve worked on reach finalist stage.

The DoC site is a finalist in the Information Architecture category and Ponoko (with Origin) are finalists in the User Generated Content category.

Poor old Sal (who, funnily enough, also worked on DoC) had an unmovable appointment with our public health care system yesterday. So it was up to Jase and myself to try and convince the 5 judges we are the generalissimos of the user-generated content generation. We’ll know later tonight if we were successful… wish me luck.

Update: We didn’t win our category but we did pick up the Craft Award! 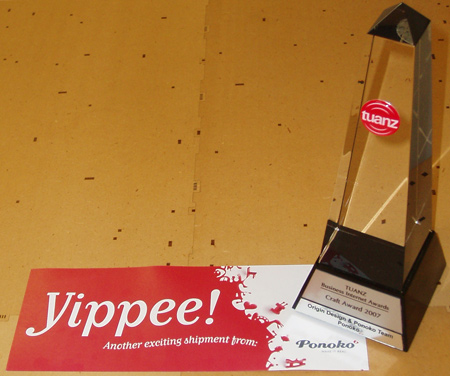 If you need a spiffy Ajax loader, like this…

…then it’s a very handy site.

With a few minutes to go until the judges announce the winner of the first FullCodePress, I think the Kiwis (aka CodeBlacks) have done it. 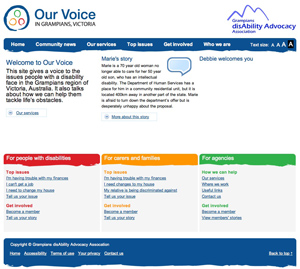 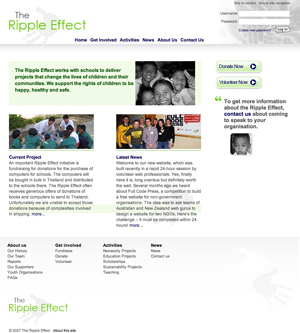 Update: The CodeBlack win (of course!)

The pesky nature of expectations

For the first half of this year when I was still at Intergen one of the major projects I was working on was ActionThis. It was a load of fun and I learnt a tonne from working on it. Indeed, the most popular post on my blog at the time of writing is the post where I introduced ActionThis for the first time.

I visited the website today and got excited to see the site had changed – including this groovy looking button on the right of the homepage above the fold: 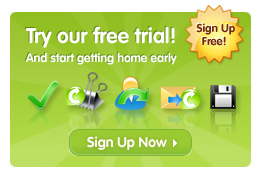 Cool! It’s a free trial and I can sign up now. I clicked on the link and was led to:

Hang on, you said I could sign up now. You didn’t say I’d have to wait for a few weeks!

People are ruthlessly brutal with their expectations these days and you really only get one chance (if you’re even that lucky) to make the impression you want. Any mistake you make, and remember this is purely in the eyes of your potential users, will be paid for.

You can’t really afford to do anything expect put your best foot forward… and then do better.

Mythbusting above the fold

I wish I had this article on blasting the myth of the fold earlier. I think it’ll be useful to anyone working in services and gets that common request from clients to cram all the “important” stuff on the page above the fold.

The next great frontier in web page design has to be bottom of the page. You’ve done your job and the user scrolled all the way to the bottom of the page because they were so engaged with your content. Now what? Is a footer really all we can offer them?
- Milissa Tarquini on Blasting the Myth of the Fold

Now I just need a similar article for why you don’t want a liquid design for your website. (No, its not wasted space, it’s called design.)

Photoshop’s save for web problem

This page here has the solution, I assume everyone will have this same issue once they’ve upgraded…

How on earth could this possibly be useful to be enabled *by default*? I feel hurt Adobe.

I was in Auckland yesterday for work and bumped into a University friend who I hadn’t seen for ages. As we go to part ways he says “Are you and S on Facebook?”.

What’s more interesting? The fact that he asked or that I said “yep!”.

P.S. Auckland keeps growing on me. The more time I spend up there, the less I dislike it.

Tomorrow (Wednesday May 2nd) we’re running a user experience and usability twilight session at work. Speakers include Trent Mankelow from Optimal Usability, Natasha Hall from Trademe, and our very own Eamon O’Rourke. The details:

A couple of things have been happening lately I’ve wanted to blog about. I thought I’d combine the lot of them for good-measure.

My most important value in life?
We have a stock-standard normal old land phone line at home. The only reason we have one is the historical legacy of Telecom forcing you to have a landline if you wanted to get DSL/broadband. S and I both live from our cellphones so we almost never use it and only two people ever call us on it, S’s parents, and telemarketers.

I have a habit of saying “thanks for calling, I’m hanging up now” to any telemarketer but I’ve been putting up with a few calls lately to listen to the odd survey and how they’re conducted (there is an ulterior motive). Last week the New Zealand Chamber Music Society called and from what I gathered they’re trying to work out why no one cares about chamber music and consequently why no one (except themselves) ever goes to their concerts.

Now for whatever reason they thought relevant, they asked me a number of questions about my values. Such as:

Uh, quite important… but it doesn’t mean I’m going to spend any of my over-taxed dollars to watch chamber music. I felt like saying “Go fish!” as they were asking the questions. Maybe they need to read Seth’s “I’d ignore him too” post.

Why don’t they advertise this?
Air New Zealand’s grabaseat promotion/feature is pretty cool. They update it daily with some very low fares to and from domestic and internation destinations – today I could have booked a ticket to Taupo for $39.

Their offers are always getting emailed around the office and it stuck out to me as a sitter for an RSS feed, it’s incrementally updating content! It is in Flash, I thought to myself, so it wouldn’t be that easy to scrape the page for that days offers to mash into an RSS feed. Hmmm, I wonder if the Flash app imports the offers as plain text or XML from somewhere. I pondered deeply.

I ‘Right click…View Source’ to see this staring back at me: <link rel=”alternate” type=”application/rss+xml”…blah blah>. Cool! Why didn’t I see the wee orange logo in the address bar? Why don’t they advertise they have an RSS feed for this!?

Direct link if this would be helpful for you and you didn’t know about it (like me).

Resistance is futile!
I wanted to start a new Word document today. I almost got as far as opening up MS Word only to find myself closing it and going to Google Docs instead.
END_OF_DOCUMENT_TOKEN_TO_BE_REPLACED

I have no idea if I’ll ever post again. I suspect I will. But for now, I have a lot to rethink.

You are currently browsing the archives for the Web category.